Secretary of the Interior Ryan Zinke displays a land-into-trust approval letter for the Shawnee Tribe in Oklahoma City, Oklahoma, on January 19, 2018. The application is among the relatively few that have been approved since the start of the Donald Trump administration. Photo: U.S. Department of the InteriorNATIONAL | POLITICS | TRUST

The Obama administration prided itself on placing more than 500,000 acres in trust for tribes and while the goal took some creative accounting to reach, newly disclosed figures show Indian Country is losing ground in the Trump era.According to a senior Bureau of Indian Affairs official, “just under” 16,000 acres has been placed in trust since President Donald Trump took office in January 2017. That averages to about 1,066 acres per month, or about 12,800 acres a year.The rate pales in comparison to the achievements of the Obama era. Between 2009 and 2016, the BIA placed an average of 58,860 acres in trust every year, or more than four times that seen so far under Trump.The figures, disclosed during a Senate Committee on Indian Affairs hearing on Wednesday afternoon, mark the first time anyone from the BIA has provided a public accounting of the land-into-trust process in the Trump era. They show how much has changed in just a short time frame.In fact, Trump’s record is so bad that it is taking Indian Country back to the George W. Bush era, when tribes complained of an unofficial moratorium on their land-into-trust applications. Yet, as a key Democrat pointed out, the new administration seems to want to make the process even more cumbersome by proposing new hurdles at the Department of the Interior
“For an administration supposedly focused on streamlining, it strikes me as odd that the department is looking at regulations that will make the process more difficult, more time-consuming and more costly — all at Indian Country’s expense,” said Sen. Tom Udall (D-New Mexico), the vice chairman of the committee.Some surprisingly frank testimony from Darryl LaCounte, a senior BIA official who appeared at the hearing, underscored those concerns. He admitted it takes a “very long time” for tribes to get a decision on their land-into-trust applications.”Typically, we’re talking years?” asked Sen. John Hoeven (R-North Dakota).”Correct,” LaCounte responded.”In some cases, quite a few years,” Hoeven continued.”Quite a few years, yes,” said LaCounte, who said he has “studied” the issue at the BIA for quite some time.According to LaCounte, about 1,300 land-into-trust applications are pending at the BIA. Of those, the vast majority are for on-reservation properties — only 200 are for off-reservation sites, he said.And of those off-reservation applications, only a small percentage deal with a controversial subject. LaCounte said there are 21 gaming proposals before the BIA, or less than 2 percent of the total requests.
View image on Twitter 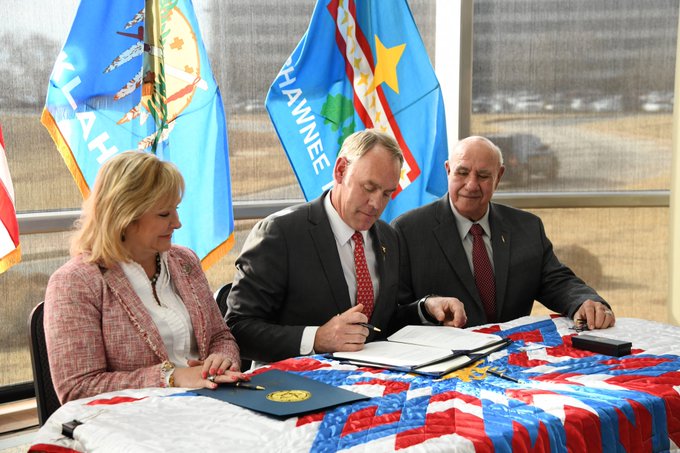 Great day for the Shawnee Tribe of Oklahoma. This ​gaming facility will ​create 200 #jobs and bring in $30 million annually to the Tribe. https://www.doi.gov/pressreleases/secretary-zinke-approves-shawnee-tribes-fee-trust-application-gaming-facility …

Despite the small numbers, off-reservation acquisitions and gaming proposals are driving the Trump administration’s agenda when it comes to tribal homelands. After just a month in office, Secretary of the Interior Ryan Zinke directed all such applications to be reviewed by political officials in Washington, D.C., subjecting them to additional levels of scrutiny, rather than streamlining them or leaving the BIA’s field locations — or the “front-lines” as the Cabinet official has called them — in charge.A month later, Zinke raised eyebrows when he suggested that tribes are interested in an “off-ramp”for their trust lands. The remarks, which came at an energy development conference, were quickly walked back by a senior official but Indian Country’s fears were already growing by then.The fears turned into a full-blown panic attack when the Trump team unveiled rule changes that tribes say will make it all but impossible for them to restore their homelands. Near unanimous opposition prompted the BIA to delay the roll-out of the controversial changes.The respite didn’t last too long. The BIA resumed consultation on the Fee-to-Trust Regulations (25 CFR 151) earlier this year and heard similar messages from tribes and their advocates.”You know, I always say it’s like Charlie Brown, when Lucy pulls the football out there,” Chairman Ernie Stevens, Jr., of the National Indian Gaming Association said at a consultation in February. “You run up, try to kick it, and then they pull it out.”

Being treated fairly, regardless of which party is in charge, ranks high among the concerns of tribes. Some, like the Lytton Band of Pomo Indians, lost all of their lands when they were terminated by the federal government.”Having a permanent homeland for our people provides a continuity for the tribal government and for taking care of our members,” Chairwoman Margie Mejia told the committee on Wednesday. “Indian people think seven generations ahead so having this land enables the tribal government to plan for the future of its members.”The tribe’s land-into-trust application has been pending at the BIA since July 2009, when Obama was in office. Though a “final” environmental assessment was issued in 2011, the 511 acres at issue, which are to be used for housing and other developments, remain in limbo amid local opposition, some of which was voiced at the hearing by a witness from the city of Petaluma.But LaCounte, who is a career employee at the BIA, said the Trump administration “supports the congressional efforts” represented in H.R.597. The bill already passed the House, though it has has yet to advance in the Senate, where tribal homelands legislation has struggled to find a footing.

An explanation for the delay was offered by another witness. Bill Krauch of the Santa Ynez Valley Coalition said Sen. Dianne Feinstein (D-California) and Sen. Kamala Harris (D-California) are keeping a close watch to ensure the bills undergo “close examination and thoughtful consideration.”

Neither Feinstein nor Harris are members of the committee. Feinstein, in the past, has called for restrictions on new tribal homelands in order to limit the growth of the $31.2 billion Indian gaming industry.Harris is a new member of Congress. When she served as attorney general for California, she repeatedly opposed tribal land-into-trust applications and participated in a closely-watched case that sought to rescind the trust status of lands held for a tribe in the northern part of the state. The Santa Ynez Valley Coalition is opposing a second tribal homelands bill that was considered at Wednesday’s hearing. H.R.1491, the Santa Ynez Band of Chumash Indians Land Affirmation Act, would place about 1,400 acres in trust for the Santa Ynez Band of Chumash Indians in the southern part of the state.Like the Lytton Band, the Santa Ynez Band has a land-into-trust application pending at the BIA. The “finding of no significant impact” was issued four years ago but local opposition has left the tribe in limbo as well.”Tribes, we look at land in a way that is perpetual. When we set foot on land … we look into the future, hundreds of hundreds of year into the future,” said Chairman Kenneth Kahn. “It’s vital for self-determination and for the strength of our customs and traditions for many, many generations.”The next steps for H.R.597and H.R.1491 would be for them to be considered by the committee at a business meeting. Assuming they are approved, they could be considered by the full Senate, where only one tribal homelands bill has passed since the start of the 115th Congress in January 2017.As for the BIA’s proposed changes to the land-into-trust process, the last consultation took place just two weeks ago, on April 12. Written comments are still being accepted until June 30.Senate Committee on Indian Affairs