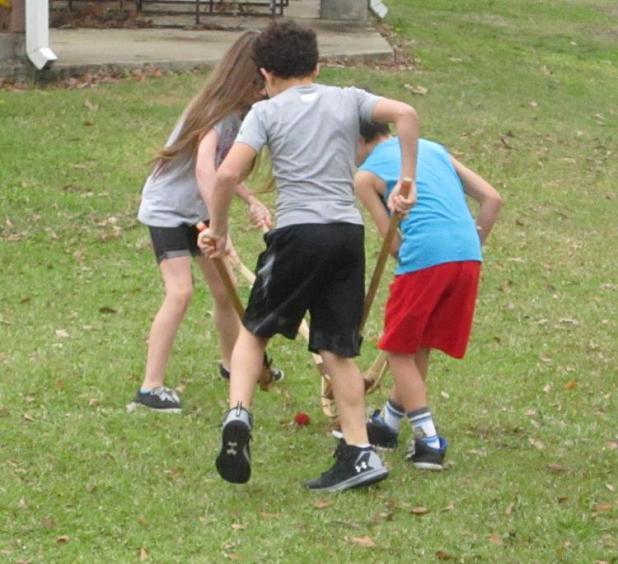 CHILD’S PLAY
Future stickballers (from left) Maya Lopez, Kaiden Pierite and Emilio Lopez, all of Marksville, practice what they learned during last year’s Native American stickball clinic. The Tunica-Biloxi will be hosting the 3rd annual Stickball Clinic & Exhibition on the Chief Joseph A. Pierite Pow Wow Grounds in Marksville on this Saturday (Feb. 17). Stickball experts will teach the clinic and play an exhibition game. For the first time, non-tribal members will be allowed to participate in the training for a $10 fee. {Photo by Raymond L. Daye}

What many call “America’s first sport” will once again be taught and demonstrated on the Tunica-Biloxi Reservation in Marksville this month.

For the first time in its three-year history, participation in the the Stickball Clinic & Exhibition for children ages 10-16 will be open to non-tribal members. The event will be from 9 a.m. to 1 p.m. this Saturday (Feb. 17) on the Chief Joe Pierite Pow Wow Grounds.

The event has always invited and encouraged non-Native Americans in the community to come out and watch the scrimmage games and demonstration by expert stickballers from the Alabama-Coushatta Tribe of Livingston, Texas. This year, for a $10 class fee, they can get off the bench and get in the game.

As in the previous two years, members of tribes in this region have also been issued invitations. They would also have to pay the $10 fee, which covers the trainers’ expenses and a cook-out lunch for participants following the clinic. Space is limited and participants must pre-register. The tribe asks that those planning to participate register by Monday (Feb. 12). A parent must accompany children to the clinic.

Native American stickball is considered to be one of the oldest team sports in North America. Stickball is the “Southern cousin” of the more popular and widely known lacrosse. Lacrosse is a traditional game of tribes of the Northern United States and Canada.

The first written description of the game was in the mid-1600s, but there is evidence that American Indian tribes had developed and played the game hundreds of years prior to then.

Stickball was especially popular among Southeastern Indian tribes, including the Tunica and Biloxi tribes. Tunica-Biloxi members played stickball regularly through the mid-20th Century, when it gradually disappeared.

Choctaw communities in Mississippi, the Coushatta in Louisiana and the Alabama-Coushatta of Texas still have active stickball programs.

Like many other cultures’ sporting events, stickball is more than just a game. It builds up the body and spirit through exercise and discipline and can be played by men or women of all ages.

Stickball is also similar to the games of such civilizations as the Greek, Roman and others in that it is a test of strength and endurance reinforcing and sharpening survival and combat skills.

The sedentary lifestyle of many tribal members prompted leaders to reawaken interest in the traditional game as a way to promote physical exercise, especially among youth, while also preserving an important aspect of their culture and history.

Barbry said he would love to see a ‘little league” for stickball for tribal and even non-tribal children. A “long-term goal” is to field a competitive adult team to carry the Tunica-Biloxi banner against the Choctaws, Coushatta, Alabama-Coushatta and other stickball-playing tribes.

Barbry said the Stickball Clinic is just one educational event the tribe hosts in an effort to preserve its culture and to give the non-tribal community a better understanding of the tribe, its history and its people.