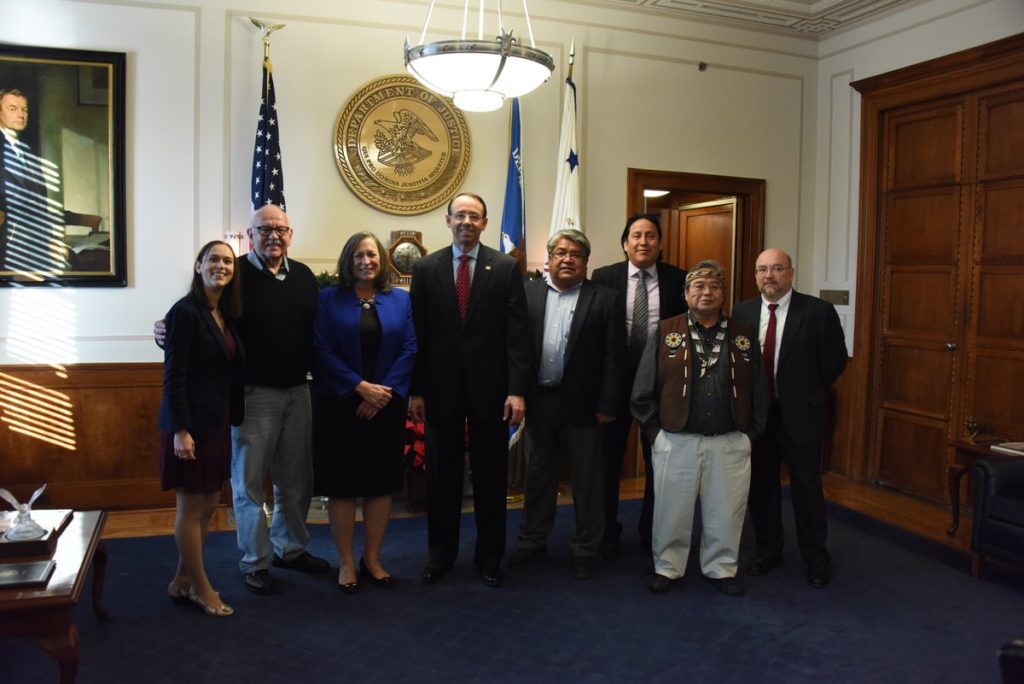 The Department of Justice welcomed representatives of the Tribal Nations Leadership Council (TNLC) to the department Monday and Tuesday for a series of discussions on how the United States and Tribal Nations can best work together to strengthen public safety and the government-to-government relationship.

“It is an honor to welcome the Tribal Nations Leadership Council, and to discuss ways to improve the lives of American Indians and Alaska Natives,” said Deputy Attorney General Rod Rosenstein.  “We are working to support them and reduce the violent crime and drug abuse that is devastating communities across our nation.”

During a two-day conference on Monday and Tuesday, the Council covered a range of issues, including drug trafficking, prosecution and treatment, cooperation across jurisdictions, data collection and access to data, violence against women, civil rights and hate crimes.  The group met with the U.S. Attorney from the District of Montana and representatives from the Office of Tribal Justice, Executive Office on U.S. Attorneys, Office on Violence Against Women, the Civil Rights Division, the Office of Justice Programs, the Environment and Natural Resources Division, the Office of Community Oriented Policing Services, the Drug Enforcement Administration, and the Federal Bureau of Investigation. The Bureau of Indian Affairs’ Office of Justice Services also participated in several sessions.

The TNLC is composed of tribal leaders representing American Indian tribes and Alaska Native villages from regions around the country.  The TNLC was created in 2010 and meets periodically to confer with top officials in the department and discuss issues of mutual concern.