NOTE: “Aspirnaut” is a registered trademark should be noted as such in any print or published stories. 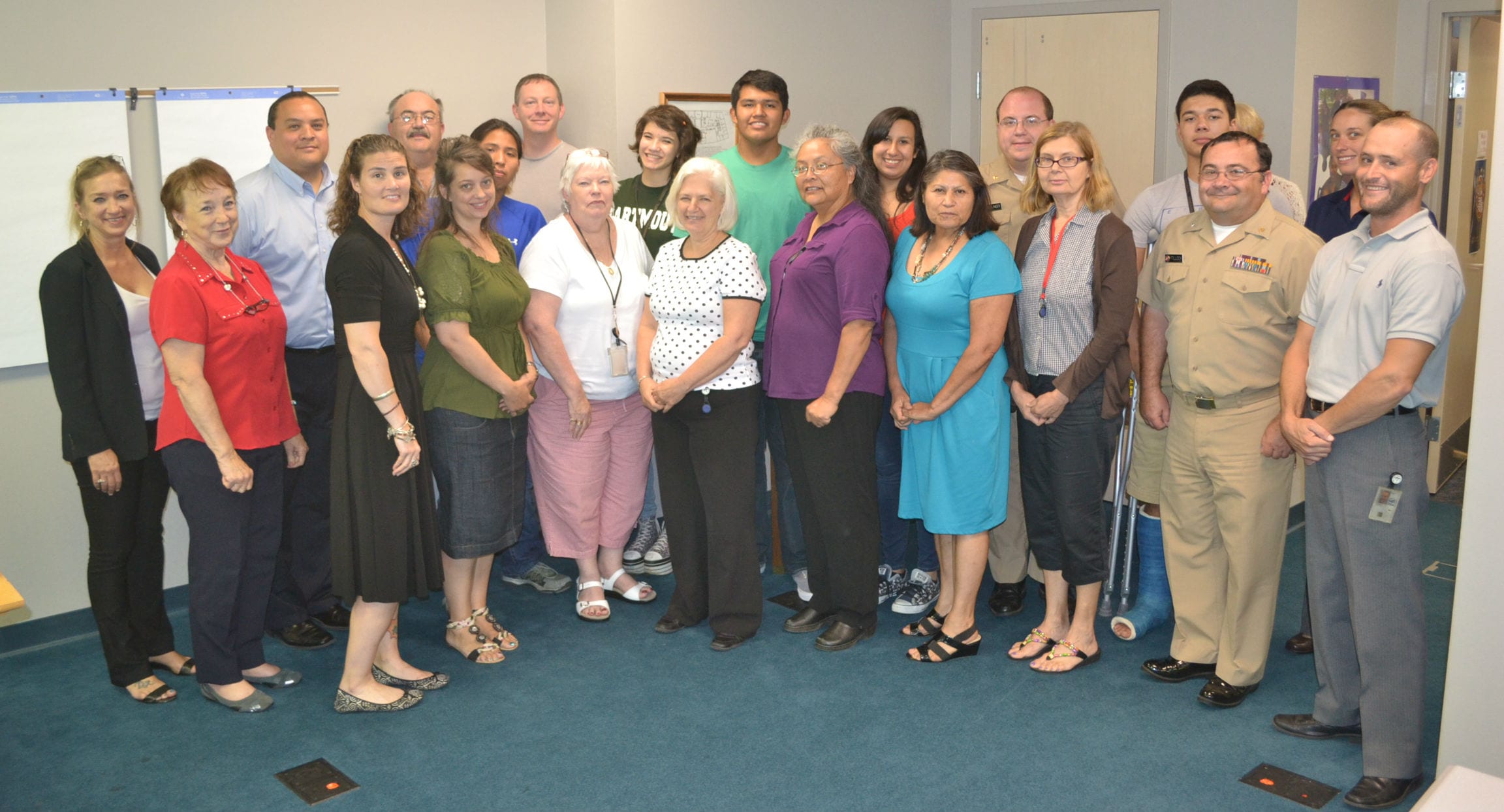 (Nashville) – – For the third year high school and college students from USET member Tribes are attending the Aspirnaut™ Summer Research Internship Program at Vanderbilt University Medical Center (VUMC) in Nashville. ASPIRNAUT™ is a hands-on and mentored basic science laboratory experience for diverse high school and undergraduate students interested in a career in the fields of science, technology, engineering, or mathematics (STEM). Interns join a scientific research team and are fully engaged in their research project–crafting of questions, designing and conducting experiments, presenting and arguing results, and keeping their lab notebook and research portfolio. Interns are from several states and are provided a salary, room and board for their 6-10 week residential internship at VUMC 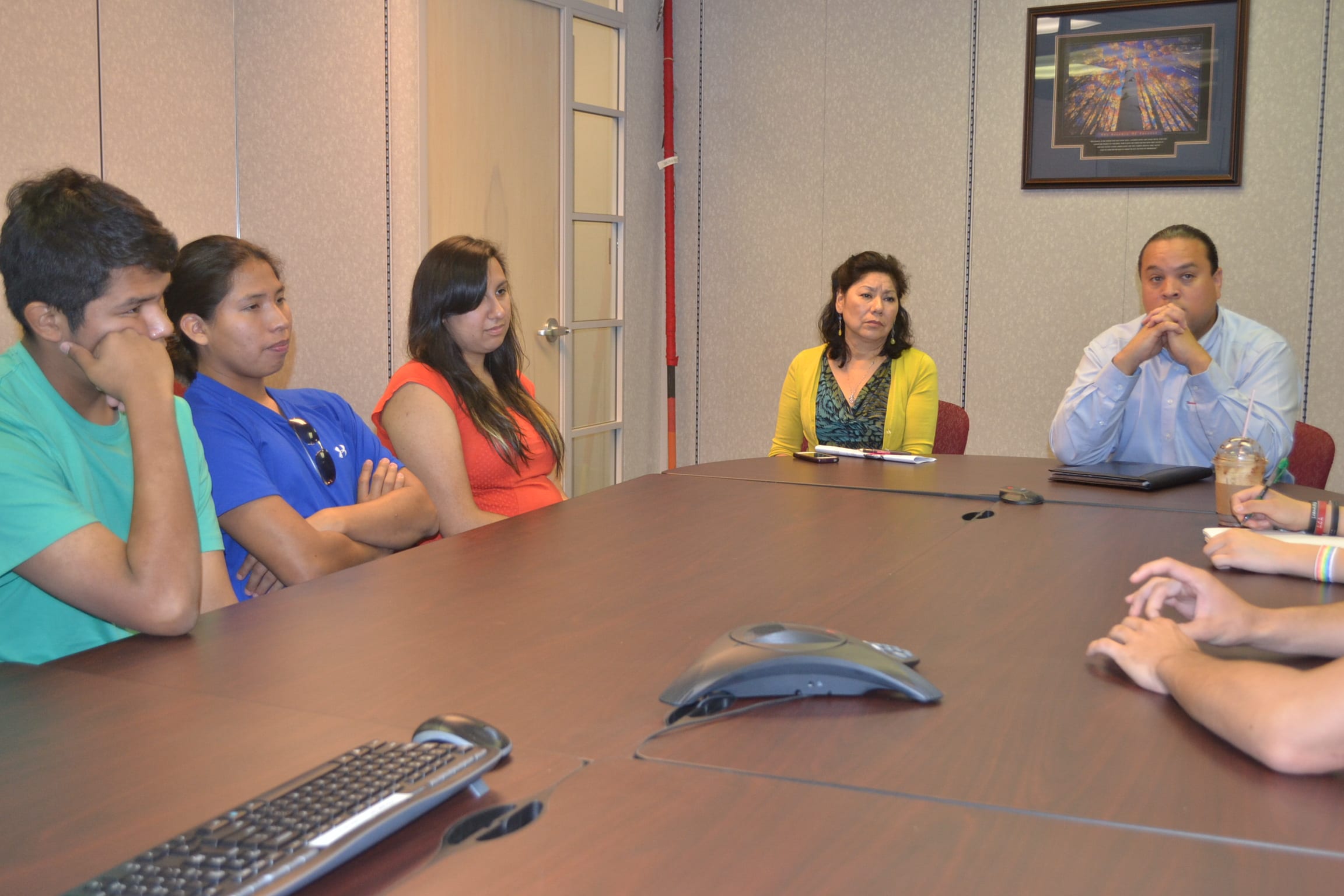 The students have been in Nashville for a few weeks working on their internships. Today (June 30, 2014) the students visited USET to learn more about the organization and to share their experiences about the Aspirnaut™ program. In previous years the students have been working with VUMC to enhance treatment for diseases, identifying resources to assist with physical fitness, and some engineering work. The Aspirnaut ™ program has a goal to enrich STEM education, promote critical thinking or problem solving, and to give the students more resources to pursue their educational opportunities after high school or during college. USET Tribal Health Program Support Director Dee Sabattus says this is a great characteristic of the program, “One of the greatest things about the program is that the staff at Aspirnaut are truly invested in each of their intern’s future. They aren’t just teaching a summer course and saying goodbye at the end. The staff teach, guide and mentor the students for as long as they need them, often times throughout high school and into undergraduate programs. They build upon their strengths to help the students accomplish their educational goals.”

The students may not pursue a career or education in a STEM field. Aspirnaut ™ has another goal to help future Tribal leaders gain an understanding of how and why innovations in STEM occur. USET Executive Director Kitcki Carroll talked to the students saying, “We are excited to have this program and we will work to keep it going so it will assist you with your educational and professional career aspirations. We (Indian Country) need students in the STEM areas and there are many opportunities for you to make an impact in Indian Country.

Aspirnaut™ summer interns for 2014 include:

Taloa Berg (Mississippi Band of Choctaw) – Taloa has been in the Aspirnaut™ program for three years, is serving as a Resident Advisor this summer for the high school interns, and Plans to pursue a career in a STEM field with a focus on serving the medical needs of the American Indian community. She will be a sophomore at Vanderbilt this coming fall.

Deon Denson (Mississippi Band of Choctaw) – This is Deon’s second year in the Aspirnaut™ program. He plans to pursue a career in veterinary medicine. This year Deon is working on a project to determine what causes metabolites to increase or decrease in human body. Metabolites have a directing effect on enzyme activity.

Robert York (Mississippi Band of Choctaw) – This is the first year attending Aspirnaut™ for Robert, who is a rising junior at Choctaw Central High School. York wants to pursue a career in dermatology. He is working on a project this year to determine the best support for teens with Type I diabetes in order to maintain balance blood glucose levels.

Tanner Liddy (Poarch Band of Creek Indians) – This is also Tanner’s first year attend Aspirnaut™. He is a rising senior at Adamsville High School and plans to pursue a degree in biomedical engineering. He is working on examining the pathology of organs from mice.

Kaitlyn Alvord (Navajo Nation) – This is the first year for Kaitlyn to attend Aspirnaut™. She is a rising junior at Cranbrook Upper School in Michigan and plans to pursue a career in surgery. She is working on a project that involves the contextual fear conditioning of chemotherapy. Kaitlyn is the only American Indian student this year attending Aspirnaut, who is not from a USET member Tribe. 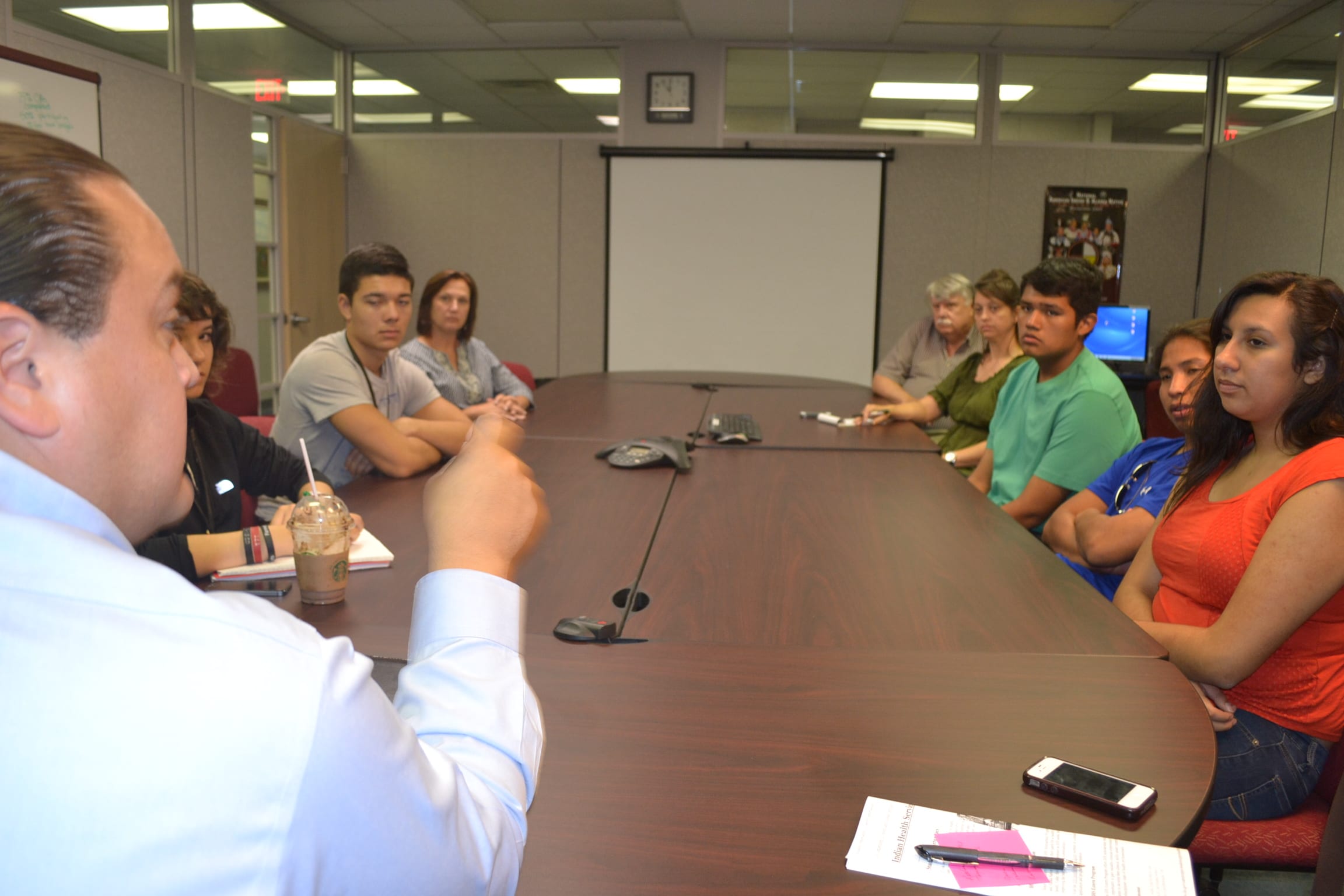 The 2014 Aspirnaut™ interns will conclude their work in the coming week and return home. Undergraduate students like Taloa Berg will continue work through the remainder of the summer break. “I am planning to apply to schools that are in larger cities like Georgia Tech, Duke, and Vanderbilt. This program (Aspirnaut™) has helped me get used to the work, the city life. Nashville is a city, but not that big to me now,” Tanner Liddy told USET. The group was also visited by the Indian Health Service (IHS) Nashville Area Office Director Martha Ketcher, who explained the services IHS provides and the education and employment opportunities that exist in the agency.

“We continuously work to know and understand our past from our elders and preserve the legacy they leave for us to build upon. We will fail to preserve that legacy if we fail to nurture our younger generations and prepare them for the future. USET has made programs like Aspirnaut™ a priority and we thank our partners at Vanderbilt for helping us rebuild our Tribal nations,” USET President Brian Patterson stated. 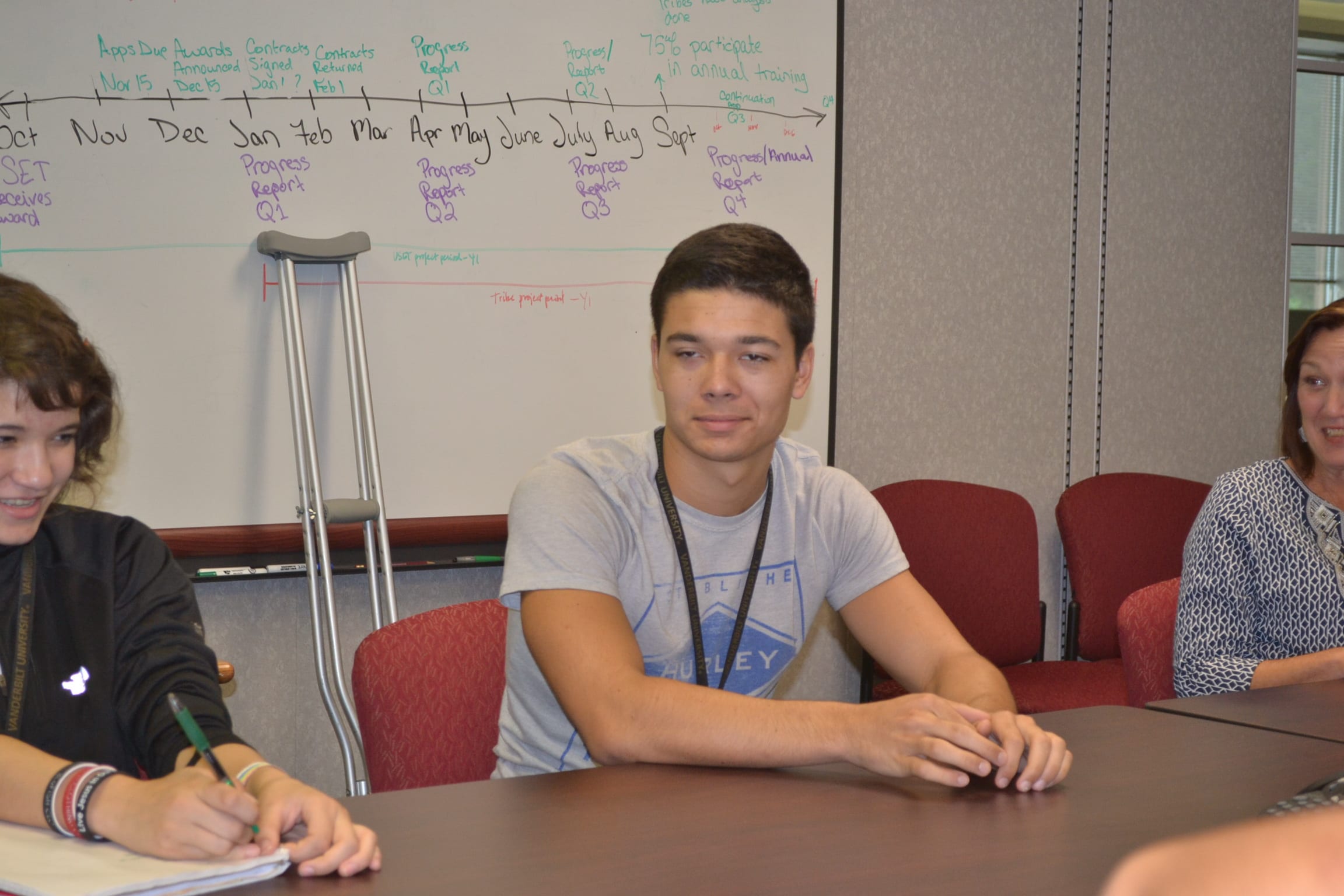 “Because there is strength in Unity”

About USET:
On October 4, 1968, the Eastern Band of Cherokees, the Mississippi Band of Choctaws, the Miccosukee Tribe and the Seminole Tribe of Florida met in Cherokee, North Carolina with the shared idea that some form of unity between the Tribes would facilitate their dealings with the federal government. The result of their vision of “Strength in Unity,” was the inter-tribal council United Southeastern Tribes. Incorporated in 1969, United Southeastern Tribes operated first out of Emory University in Atlanta, Georgia, and then moved to Sarasota, Florida. In 1975 it relocated again to Nashville, Tennessee, where it resides today. The organization changed its named in 1978 to United South and Eastern Tribes, Inc. to better reflect its membership, as federally recognized Tribes from Maine, to Florida, to Texas affiliated themselves with the organization.

Today, United South and Eastern Tribes, Inc. is a non-profit, inter-tribal organization that collectively represents its member Tribes at the regional and national level. USET has grown to include twenty-six federally recognized Tribes, operating through various workgroups and committees and providing a forum for the exchange of ideas and information amongst Tribes, agencies and governments.

USET represents and promotes the interests of its member Tribes through conferences, associations, work groups, partnerships, etc. Additionally, it serves as a forum for the exchange of ideas, works on behalf of its membership to create an improved quality of life for American Indians through increased Health, Education, Social Services, Housing, Economic Development, Transportation, and Justice opportunities, and works to promote Indian leadership to ensure Indian Country’s continued growth, development, and prosperity as Tribal Nations.

United South and Eastern Tribes, Inc. is dedicated to enhancing the development of federally recognized Indian Tribes, to improving the capabilities of Tribal governments, and assisting the USET Members and their governments in dealing effectively with public policy issues and in serving the broad needs of Indian people.