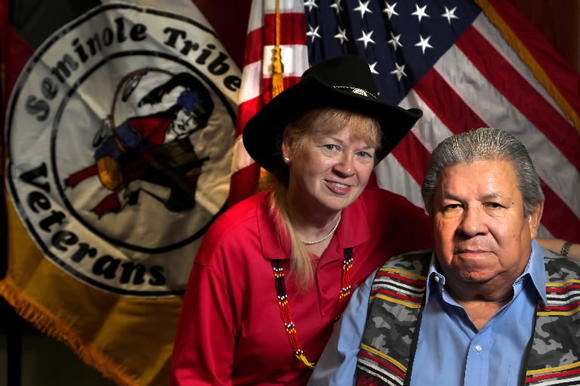 He spent seven months on the frontline, dodging gunfire in the jungles of Vietnam.

But it was decades later before Stephen Bowers would win one of the most important battles of his life: Convincing Congress to honor Native American war veterans with a statue and education center in Washington D.C.

“It was an uphill battle,” said Bowers, 65, an official with the Seminole Tribe of Florida. “But now we have an opportunity for Indian tribes to showcase their special history of going to war for the United States.”

Bowers, of Hollywood, spearheaded a grassroots campaign in 2011 after noting that, despite all the memorials in Washington, none specifically paid homage to the Native Americans who have fought in every conflict since the Revolutionary War.

That includes 42,000 who served in Vietnam, accounting for one of every eight soldiers, the highest per capita rate of any ethnic group, he said. He was particularly rankled that a statue near the Vietnam Veterans Memorial depicts three soldiers, one white, one black and one Hispanic.

In December, Congress approved a statue on the grounds of the National Museum of the American Indian. The statue also is to honor Alaskan Natives and Pacific Islanders, such as Samoans and Filipinos.

An education center will also be built near the Vietnam Memorial. It will include exhibits detailing the war efforts of various tribes, provide a multimedia timeline for the Vietnam War and display almost 400,000 pieces of memorabilia, from boots to medals, left at the Vietnam Wall.

“The statue is not going to be able to tell a story,” Bowers said, explaining the need for the education center. “More is needed to educate people about Indian history.”

Both projects require fund-raising campaigns before they can be built over the next four to six years. The education center, in particular, will cost about $120 million, with $30 million raised so far, said Elizabeth Bowers.

“Stephen and I have committed to raise $10 million,” she said, adding they will ask businesses that manufacture slot machines and build casinos to kick in. “We’ve moved our little idea smack into the middle of the National Mall.”

For Stephen Bowers, it’s a victory that didn’t come easily.

While a Broward Community College student, he was captivated by developments in Vietnam. He volunteered for the Army and was deployed to Vietnam in 1969, becoming a squad leader in the 173rd Airborne Brigade.

His commanders often called upon him to be the “point man,” or the first one in a unit to advance toward the enemy – because of his Indian blood, he said.

“They had this thought that an Indian could see better at night or hear better at night, that we have an innate ability to detect danger,” Bowers said. “It’s a stereotype that people still have about Indians.”

Though shot at frequently, he was never wounded. “Every day I was either on patrol or on an ambush at night,” he said.

After serving seven months, his father was killed in a car accident in Florida.

The Army “picked me up, right out of the bush, and brought me home as quick as they could,” he said. “That’s one of the regrets I have, that I couldn’t go back and serve the rest of my tour.”

After he was discharged in 1971, Bowers went to work for the Seminole Tribe. But it always bothered him that the United States was forced to retreat and that Vietnam veterans were not given due respect.

“I wasn’t really proud of the way we left Vietnam,” he said. “We all fought, but we thought we’d have a different ending.”

In the late 1980s, he traveled to Washington D.C. to see the Vietnam Memorial and realized that despite the war’s outcome, those who served had done so honorably. He also decided that Native Americans needed recognition, not just for Vietnam, but all wars. His wife wholeheartedly agreed.

“We really have a rich military history,” she said.

Today, the Bowers are active in various military organizations and travel frequently to raise money for their projects. They spent Memorial Day weekend in Washington to work out details on how the statue and education center will be built.

“Hopefully, now we can provide a profound statement about our American history,” said Stephen Bowers. “There’s no one tribe that outshines another when it comes to defending this country.”