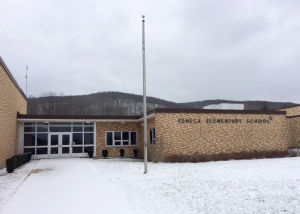 SALAMANCA — Nearly 50 years to the day since the Salamanca City Central School District submitted plans to the state for construction of Seneca Elementary School, district residents Tuesday voted to sell the building to the Seneca Nation of Indians for $950,000.

The sale was part of a special vote among Salamanca school district residents, who also approved a referendum by a close 172-163 tally to allow the district to purchase 608 Broad St., a property adjacent to the school’s Iroquois Drive campus, for $41,000.

“Anytime the election comes out 70 percent in favor, I think we did our due diligence — we articulated the reasons and the value of the sale of the property,” Superintendent Robert Breidenstein said about the Seneca Elementary referendum. “I think the Seneca Nation also did an admirable job explaining their intended use of the property.”

He said he believed the much closer vote on the Broad Street property is a representation of some concern from community members, including those on Broad Street, about the uncertainty of the school’s plan for the property.

In January, the school board approved the sale of the former Seneca Elementary School, which is located on Center Street in the city’s west end, to the Seneca Nation. Last year, the board voted to close the building and move all students and administration to the district’s other two campuses.

Seneca Elementary’s final classes in that building were held in June. The district’s third grade was moved to Prospect Elementary and the fourth, fifth and sixth grades, as well as Seneca Elementary’s administration, are now at the Junior-Senior High School campus.

With the building now in the Seneca Nation’s hands, the Nation will likely begin the process of turning the property into what it has deemed a Seneca Arts and Learning Center.

“The Seneca Nation is very pleased that the residents of Salamanca voted to approve the sale of Seneca Elementary to the Nation in order for us to begin developing a new Seneca Arts and Learning Center,” said Seneca Nation President Barry E. Snyder, Sr.

“This has been a collaborative effort from the start between the school district and our people. The end result not only helps to provide fiscal sustainability for the city’s students long-term, but most importantly, opens up an opportunity for us to create a Seneca academic campus focused on learning, arts and culture. Many nya:wehs to our Salamanca neighbors for this vote of support.”

Most notably, the Nation’s plans for the building include expansion of its Early Childhood Learning Center (ECLC), which is currently located behind the Allegany Administration Building.

It is presumed expanding the program will help to eliminate the long waiting list that current exists for children to enter. The ECLC will also see an expansion of current programs, including additional language and educational programming., according to a recent release issued by the Nation.

Other plans originally released for the building include space to house education administrative offices, museum collections and the Seneca Nation of Indians Center for Business Growth.

Outside the building, which sits on 9.78 acres of land, plans potentially include a garden project, a walk path with plant and tree identification through the forested area on the property and a ball field. Those plans were outlined during a community forum held at the Allegany Administration Building last year.

The school will also be able to take advantage of an improved Pennsy Trail, a walking and hiking trail behind the school which stretches the width of the city. A multi-million project on the trail this year is expected to add educational signs and features to the path.

Nation officials noted in February that should the sale be approved, it is expected final design of the new Seneca Arts and Learning Center would begin later this month.

Purchase of 608 Broad St. will add additional green space to the school’s campus, Breidenstein said. No plans have been formally announced for the property but ideas have ranged from playgrounds to a new entrance for the Iroquois Drive campus.

The land, previously owned by Michael D. Zarzecki of Olean, is the fourth lot west of the school’s current entrance.

“Now that the property is under our umbrella, once we close the deal … then we can start the planning process as far as what might be in appropriate use of that parcel of property,” Breidenstein said.

The inclusion of Seneca Elementary classes and administration on the Junior-Senior High campus, as well as the purchase of 608 Broad St., could be the first actions taken by the Salamanca school district toward combining to a K-12 campus.

The board in January gave the go-ahead for district officials to pursue the planning and design of a single campus concept. Whether the idea, still very much in its infancy, is both feasible and practical is expected to be determined during upcoming future studies.

The former Seneca Elementary School building was built in the early 1960s and first opened to classes in January 1966. At its start, the school combined 179 pupils from Allegany Indian School at Red House and Ward One School in West Salamanca, as well as 13 fifth graders from the city’s first ward who had previously attended Jefferson Street School.