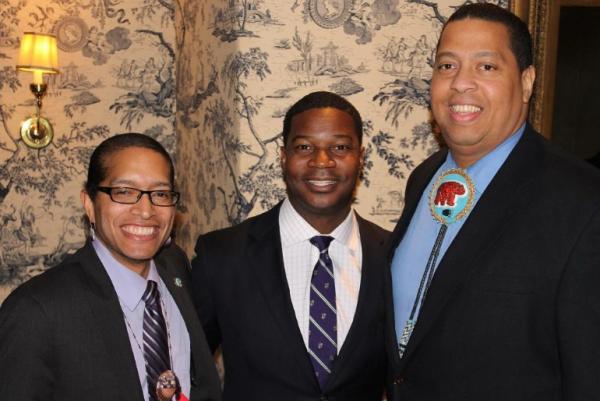 Harvard University hosted the leaders of  the Aquinnah and Mashpee Wampanoag tribes at a clambake at the Harvard Faculty  Club February 7 to honor the longstanding relationship between America’s first  institution of higher learning and the indigenous people of the territory on  which it is built.

“The Mashpee Wampanoag tribe and Harvard University have ties that go all the  way back to the university’s earliest days,” Mashpee Wampanoag Chairman Cedric  Cromwell said in a statement. “It’s important to celebrate that connection and  look for ways that we can work together in the future.”

Tobias J. Vanderhoop, chairman of the Wampanoag Tribe of Gay Head (Aquinnah),  is a 2008 graduate of Harvard’s Kennedy School of Government.

“While I was at the Kennedy School, I cherished the opportunities and  knowledge that I could then bring back to my community,” Vanderhoop told The Crimson, Harvard’s student newspaper. “But there is  still a ways to go in terms of Native American inclusion.”

During the 2018 admissions cycle, Native Americans were the only group of  non-white students whose application rates did not increase, reported the The Crimson.

Judith Sanford-Harris, a member of the Mashpee Wampanoag Elders Council, told  The Crimson that Harvard can do more to create a welcoming environment  for Native American applicants.

“More Native faculty—and not just faculty hired to teach Native studies  courses—could attract some students,” Sanford-Harris told the student newspaper.  “Scholarships earmarked for Native students, in addition to the financial aid  already offered, would also go a long way in encouraging students to apply and  to matriculate if accepted.”

The university’s relationship with Natives goes back to its earliest days.  Harvard College was founded in 1636 and struggled financially in its early years  until the English Society for the Propagation of the Gospel in New England  stepped in, raising money and granting funds for the education of Indian boys at  the university, according to a Harvard website. The Society’s funds were also used to  construct the Indian College, Harvard’s first brick building, in 1655.

“The College, in turn promised to waive tuition and provide housing for  American Indian students,” according to a Peabody Museum at Harvard website. “The founding Harvard Charter of 1650 manifests this promise and dedicates  the institution to ‘the education of the English & Indian Youth of this  Country in knowledge: and godliness.’ The Indian College’s founders hoped  graduates would proselytize their home communities with the Gospel.” The  Society’s funds also paid to print the first Bible translated into the native Algonquian language  by the missionary John Eliot. The “Indian Bible” was first published between  1660 and 1663.

Two Native students attended Harvard sometime during the 1650s: John  Sassomon, and James Printer, an apprentice in the production of Eliot’s “Indian  Bible,” according to the website. Native students who attended the Indian College  included John Wampus, who departed before graduation, and Joel Iacoomes, and  Caleb Cheeshahteaumuck, both members of the Wampanoag Tribe of Martha’s  Vineyard. Cheeshahteaumuck was a member of Harvard’s Class of 1665, but Iacoomes  died just before graduation. 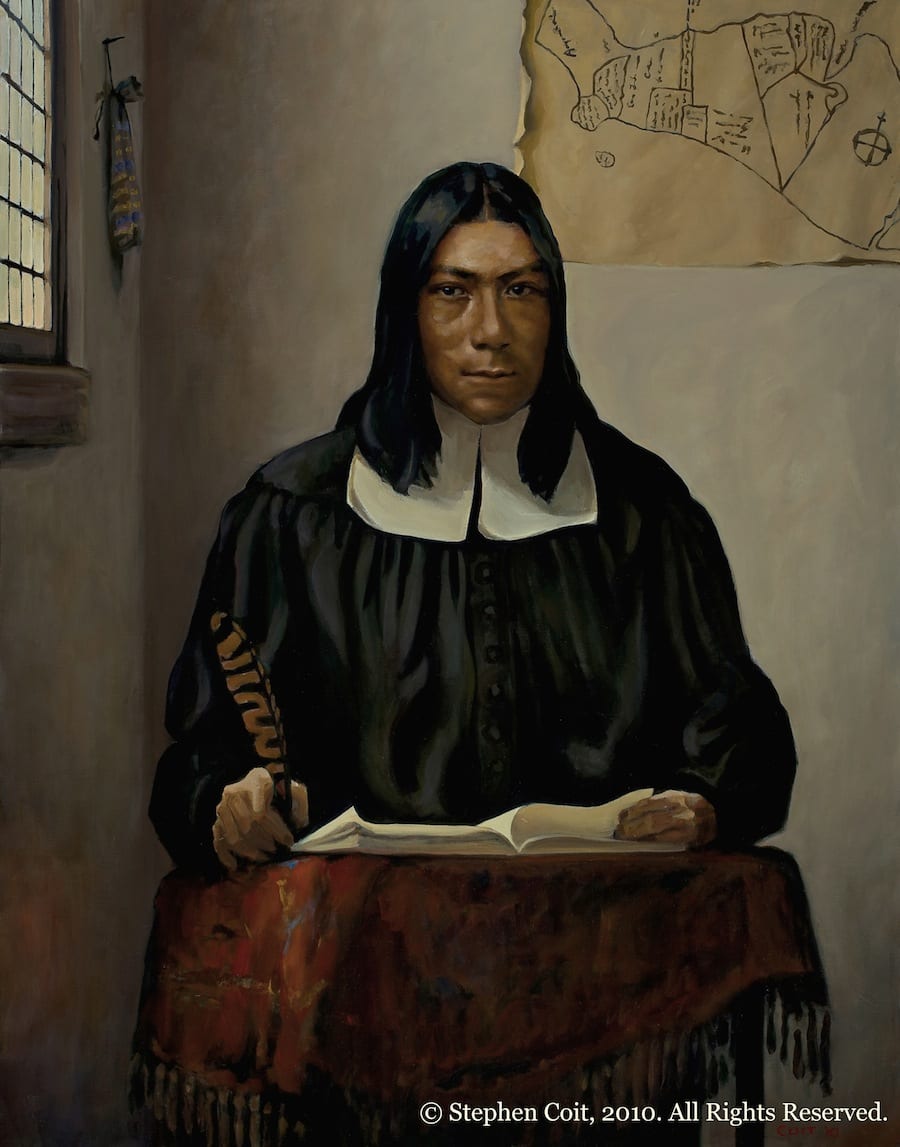 This portrait of Caleb Cheeshahteaumuck, the first Native graduate of the  university, hangs on the first floor of Annenberg Hall. (Harvard Foundation)

RELATED: The First Native Man of Letters: Harvard’s Indian Colonial Poet  (in Latin!)Caleb’s Crossing, a New York Times best-selling novel by Geraldine  Brooks, was based on the life of Caleb Cheeshahteaumuck.

Tiffany L. Smalley, class of 2011 was the first member of the Wampanoag Tribe  of Gay Head Aquinnah to graduate from the College since Caleb  Cheeshahteaumuck in 1665.

“It’s so important to celebrate and commemorate the shared history between  Harvard and the Wampanoag,” Smalley told The Crimson.

Cromwell has also made efforts to highlight the longstanding relationship  between the Wampanoag people and Harvard. He has orchestrated an effort to  integrate Harvard University with the Native American community and successfully  lobbied the university to award Joel Iacoomes, who died in a 1665 shipwreck  shortly before graduating, with a posthumous degree in 2011.

Cromwell told The Crimson that Harvard must continue to foster  relations with local tribes—particularly by recruiting more indigenous  students.