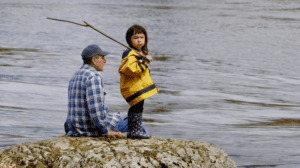 A scene from the documentary “Dawnland,” showing a father and child on the Penobscot Indian Island Reservation in Maine. (Ben Pender-Cudlip/Upstander Project)

By Tracy Rector
Tracy Rector, an Indigenous media activist and artist, is the impact producer for the film “Dawnland” and co-founder of Longhouse Media.
November 21 at 6:00 AM

My grandmother Inez was a striking beauty, and quiet. Seen but not heard. She was the second youngest of 8 children in a family that lived in Albuquerque. Through circumstances that remain hazy today, she was adopted by a white couple in the 1930s. For the rest of her life, Inez suffered from depression and anxiety, which she medicated with alcohol. My father was raised enveloped by her pain. At age 16, just before Thanksgiving, he found her body on the living room couch; she died of liver cirrhosis.

The Indian Child Welfare Act (ICWA), designed to keep children like Inez in their community, turned 40 years old this month — and it has also never been under greater threat. ICWA was intended to counter a foster-care and adoption system that systematically removed Native children from their families. The law says that tribes, not state governments, are in the best position to decide where to place Native children who have been removed from their homes. It gives preference to relatives, then other tribal citizens, then citizens of any other tribe; other placements are a last resort. Seventeen national child welfare associations have endorsed it as the “gold standard” of child welfare practice.

Over the past several years, as part of a coalition of groups including for-profit adoption agencies, the right-wing Goldwater Institute has spearheaded attacks against ICWA in multiple states, including California, Arizona, Oklahoma and Minnesota. They finally made inroads last month: After a Texas couple sued for the right to adopt a Cherokee Nation toddler, a federal district court judge, Reed O’Connor, struck down portions of the ICWA, finding that the disputed sections violate the Fifth Amendment’s equal protection guarantee by mandating racial preferences. The case may wind up before the Supreme Court, where Justice Brett M. Kavanaugh is widely believed to be a deciding vote against it.

The forced separation of Indigenous families has deep historical roots in the United States. In 17th-century New England, just as enslaved Africans were being brought by ship to the Colonies, children from the Pequot, Narragansett and Wampanoag tribal nations were enslaved and forced into indentured servitude. In the late 19th century, according to historian Preston McBride, at least 250,000 students were forced into institutions like the Carlisle Indian Industrial School. As part of these forced assimilation efforts, the students’ hair was shaved and they were forbidden from leaving, having contact with their families, speaking their language or practicing their religion. In the now-infamous words of Carlisle’s founder, U.S. Army Col. Richard Pratt, who was considered progressive in his day: “Kill the Indian … save the man.”

Such racist practices filtered into child welfare systems as they were formed in the mid-20th century. In the late 1950s, the U.S. government sponsored the Indian Adoption Project to test its theory that Native children were better off in white homes. They weren’t. Many were ostracized and bullied in their new communities. By the 1970s, 25 to 35 percent of Native children were living away from their families in foster care, adoptive homes or boarding schools, and 85 percent of them wound up in white homes.

Although ICWA was passed in 1978, Indigenous child removal is not a problem of the past. As recently as 2016, the state of South Dakota was found to have violated the law. Since 2010, state welfare workers had removed more than 1,000 Native American children from their families and placed them disproportionately in non-Native homes. Hearings for these cases typically were held within 48 hours of the child’s removal, and took less than five minutes. Parents were not assigned counsel to represent them, and were prohibited from testifying, calling witnesses or cross-examining state employees. The state won every time.

The trauma of such family separations has lasting effects. I’m the impact producer for a new documentary, “Dawnland,” which traces the consequences of ICWA violations for the Wabanaki, a confederacy of five nations in Maine and the Canadian Maritimes. The testimony is heart-wrenching.

Dawn Neptune Adams, 44, recounts the lie that defined her childhood after she was taken away from her family: “My foster mother told me that I was at her house because nobody on the reservation wanted me, and that I was there out of the goodness of her heart, and that she would save me from being Penobscot.” Adams had her mouth washed out with soap for speaking her Native language. Others had similar reports of being abused verbally, physically and sexually by their foster families, and of being taunted about their heritage. In 2015, a truth and reconciliation commission in Maine found that within the last decade, Native children were still five times more likely to enter foster care than other children. This commission, the first of its kind ever sanctioned by the government, concluded that this constituted an ongoing act of cultural genocide.

The law’s opponents argue that ICWA illegally discriminates on the basis of race, imposing race-based restrictions on foster care and adoption that override the “best interest of the child.” But being Native is not a racial designation — it’s a political, community and familial designation. For centuries, U.S. law has consistently recognized tribes as sovereign nations with rights of self-government, including over their own citizens. ICWA is an important example of nation-to-nation relationships in operation. Its demise would add to the trail of broken treaties that the U.S. government has failed to uphold. According to the Nation, some legal experts think that striking down ICWA “could undermine the authority of tribal courts, shutter tribal casinos and open up reservations to privatization.” What’s at issue is not race, but sovereignty.

This country has long pursued policies that rupture families, both within its borders and. more recently, at them (where Central American migrants, many of them members of Indigenous groups, have been separated from their children). ICWA came too late to alter the arc of my family’s history — and even today, it’s not a cure-all. But the law offers Native people some hope that we might break the historical pattern and keep our communities whole. It reminds us that Native children thrive when they know their heritage. It affirms that we are still here — not relics of the past. Its protection remains vital to our continued existence and cultural survival.

CORRECTION: A previous version of this article said that the author’s grandmother was the youngest of 11 children. She was the second youngest of 8 children.