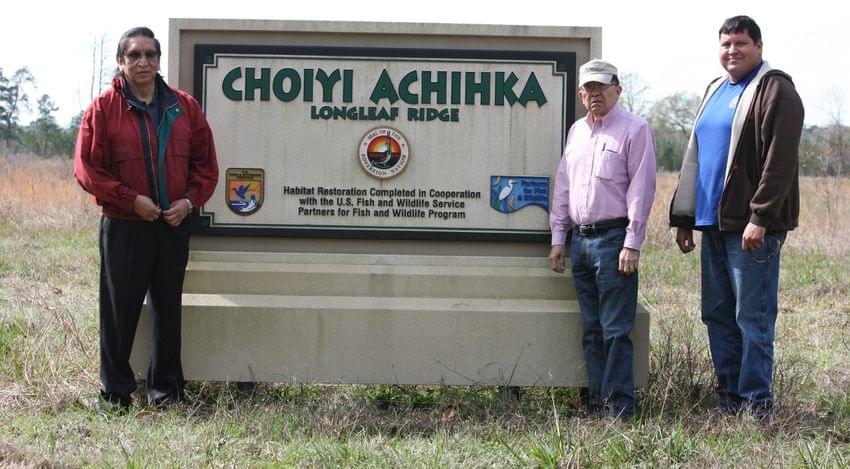 Coushatta Tribe members (from left) Bertney Langley, Ernest Sickey and Gardner Rose show a sign that honors the habitat restoration partnership between the tribe and the Service. Photo courtesy of the Coushatta Tribe

Woven from the Landscape

Before the United States was settled by Europeans, longleaf pine forests covered about 90 million acres of the Southeast. Most of these forests were logged for turpentine and lumber, and by 1975 they had been reduced to about 5 million acres.

The U.S. Fish and Wildlife Service (Service) is working with countless private landowners, state and federal agencies and conservation groups, to restore the glory of the longleaf. The motivation for many of these conservationists is to help the many at-risk and endangered birds and wildlife that thrive in longleaf forests from the red-cockaded woodpecker to the gopher tortoise.

The Sovereign Nation of the Coushatta Tribe of Louisiana has an additional motive: basket-weaving, a part of its heritage. Coushatta elders weave beautiful, intricate baskets from longleaf pine needles that are collected worldwide and are included in Native art collections in the Smithsonian and other museums.

So a partnership between the Coushatta Tribe and the Service to plant more longleaf pine seedlings is as natural as a walk in the woods.

“It’s an important part of our culture. My grandmother was born around 1918,” said Gardner Rose, natural resources manager for the tribe. “She started when she was five years old. Some of the men weave river cane baskets but she said the river cane would cut your fingers, so she chose the longleaf pine needles. They would trade them for food.”

Rose said that today about 25-30 elders, out of a tribe of about 800-plus, weave longleaf pine needle baskets. A basket takes about a week to make, and can sell for $300 or more.

The Coushatta were originally from Tennessee, but migrated to central Louisiana in the 18th century and settled about two hours west of Baton Rouge. On about 5,000 acres of tribal land, they have tribal offices, a casino, and now, a lot more longleaf pine.

The Coushatta and the Service started as partners in 2009, and have restored habitat on three separate tracts of land totaling more than 350 acres; work will be completed in 2018. On the first tract, the Service paid for 28 acres of longleaf pine seedlings, five acres of bottomland hardwood seedlings and herbicide to control invasive species. The Service and the Coushatta pooled personnel and equipment to do the work.

“Some of those longleaf trees we planted that year are 20 feet tall now,” said Andrew Dolan, the Service’s state private lands coordinator in its Lafayette, Louisiana field office, who has worked most closely with the tribe.

The partnership continued with a second tract, then a third, with work ongoing. This collaboration has also included the creation of sloughs, or wetlands, which attract many species of waterbirds. Some tribe members hunt deer and ducks on the land, but the land is not open to non-tribal members of the public.

Birds and wildlife that have benefitted from the work include grassland and forest songbirds, raptors, wading birds, shorebirds, and pollinator insects. Red-cockaded woodpeckers, listed as endangered under the Endangered Species Act, have not yet moved in, but Dolan said they are as close as 10 miles away and may take refuge in the pines in the future.

In 2013, the Service’s Partners for Fish and Wildlife Program gave the program a Landowner Stewardship Award.

“The longleaf tracts will represent the only longleaf stands for dozens of miles in any direction in an area that was historically mostly longleaf,” the Service stated in the 2013 award. “We have hopes that these longleaf restoration efforts will inspire other neighboring landowners to follow the Coushatta Tribe’s good example, and consider longleaf restoration in the future.”