Martin Luther King, Jr., Day, in the United States, holiday (third Monday in January) honoring the achievements of Martin Luther King, Jr. A Baptist minister who advocated the use of nonviolent means to end racial segregation, he first came to national prominence during a bus boycott by African Americans in Montgomery, Alabama, in 1955. He founded the Southern Christian Leadership Conference in 1957 and led the 1963 March on Washington. The most influential of African American civil rights leaders during the 1960s, he was instrumental in the passage of the Civil Rights Act of 1964, which outlawed discrimination in public accommodations, facilities, and employment, and the Voting Rights Act of 1965. King was awarded the Nobel Prize for Peace in 1964. He was assassinated on April 4, 1968. Martin Luther King, Jr., Day is celebrated on Monday, January 16, 2023.

Almost immediately after King’s death, there were calls for a national holiday in his honour. Beginning in 1970, a number of states and cities made his birthday, January 15, a holiday. Although legislation for a federal holiday was introduced in Congress as early as 1968, there was sufficient opposition, on racial and political grounds, to block its passage. In 1983 legislation making the third Monday in January a federal holiday finally was passed, and the first observance nationwide was in 1986. The day is usually celebrated with marches and parades and with speeches by civil rights and political leaders. 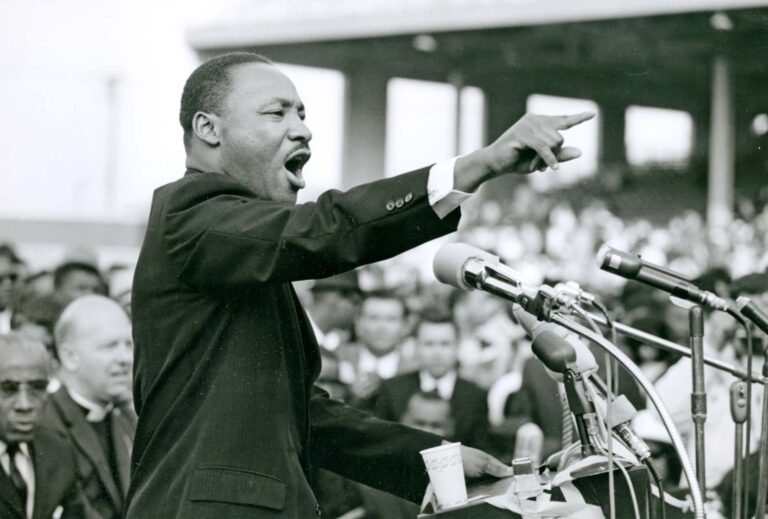 The concept of Martin Luther King, Jr. Day as a holiday was promoted by labor unions. After King’s death, U.S. Representative John Conyers and U.S. Senator Edward Brooke introduced a bill in Congress to make King’s birthday a national holiday. The bill first came to a vote in the U.S. House of Representatives in 1979; however, it fell five votes short of the number needed for passage. Two of the main arguments mentioned by opponents were that a paid holiday for federal employees would be too expensive and that a holiday to honor a private citizen would be contrary to longstanding tradition, as King never held public office. At the time, only two other figures had national holidays honoring them: George Washington and Christopher Columbus.

Soon after, the King Center looked for support from the corporate community and the general public. The success of this strategy was cemented when musician Stevie Wonder released the single ‘Happy Birthday’ to popularize the campaign in 1980 and hosted the Rally for Peace Press Conference in 1981. Six million signatures were collected for a petition for Congress to pass the law and is considered the largest petition in favor of an issue in U.S. history.

President Reagan originally opposed the holiday, citing cost concerns. But on November 2, 1983, Reagan signed a bill, proposed by Representative Katie Hall, to create a federal holiday honoring King. The bill had passed the Senate by a count of 78 to 22, and the House of Representatives by 338 to 90. The holiday was observed for the first time on January 20, 1986. It’s observed on the third Monday of January rather than directly on Martin Luther King, Jr.’s birthday because it follows the guidelines of the Uniform Monday Holiday Act.

Martin Luther King’s unparalleled contributions to racial justice for Black Americans have been revolutionary. On Martin Luther King, Jr. Day or MLK Day, schools and offices are closed, but people fully participate in remembering and honoring everything King has accomplished. His values and historical place in American history are discussed and advocated to educate communities and coming generations on the importance of equality and King’s influence. Movies and documentaries on his life are shown, and businesses and organizations run by and for the Black community are shown some support.